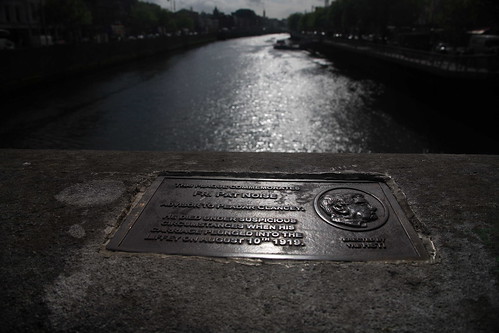 The wording on the plaque on O'Connell Bridge:

I recently learned of that plaque on O’Connell Bridge commemorating a certain fictitious Fr Pat Noise. Though it has apparently been there for two years I never noticed it. Neither did Dublin City Council, which is now intent on removing it without any consultation with the public. This is a pity, it seems to me. Dubliners have a traditional affection for subversive characters and quirky landmarks; think of how much we've taken the Bloomsday blarney to heart (albeit half a century after Joyce's death), and how much revenue it brings from tourism; think of (I hate to say it) ghastly Molly Malone, a life-size Easter/Playboy Bunny cast in chocolate (but undoubtedly a huge magnet for tourists); think of the successful campaign to retain the old neon ‘Why Go Bald?’ sign off South Great George’s Street; think of how much we miss Thom McGinty, The Diceman.

Dubliners are also known to appreciate a good joke. This is a very good (if very quiet) joke; it is also something more, the creation of a newly-minted fictional presence, complete with dramatic narrative, that has been under every passerby's nose for two years. That is part of its subtlety; it was designed to be overlooked (since that is what one does to the walls of Dublin's busiest bridge).

I went to see Fr. Noise for myself today. In the 15 minutes I was there taking photographs I spoke to about a dozen people who stopped to read the plaque; all were enthusiastically in favour of keeping it. And why not? This (Noise in a teacup) is utterly unique, all the more so for the artist remaining anonymous, and it sets off all sorts of interesting little echoes: historical, literary, philosophical, etc. etc. If the Council wants to be pragmatic, they might consider that Fr. Noise would also provide one more little tourist magnet. He should be treasured.

It would take an imaginative leap on the part of the Council to let the plaque remain, but if enough interest is shown it just might be possible. Two whole years living under our noses. Joyce would heartily approve, as would Flann O'Brien and Jorge Luis Borges. Fr Pat Noise has secured his right to stay.

On December 11 I sat through a meeting of the South East Area Committee in the City Hall. Ruairi Quinn had informed me about it; he knew I'd be interested because the chairman, Cllr Dermot Lacey (Labour rep for the Pembroke Ward), was putting forward a motion that the plaque to Fr Pat Noise should remain in situ. The meeting was open to the public so anyone could attend.

Some of the councillors on Dublin City Council want the plaque removed because (apparently) they don't like being upstaged, having a pair of upstart arty fartys put one over on them. The fact that the plaque was there in the first place was bad enough, but that it had been under their noses for 3 years or so really infuriates them.

The meeting was interesting enough to begin with. I had the sense of entering an inner sanctum, rather like a courtroom: a big, dully bright chamber paneled with enormous full length portraits of bewigged dead mayors and other worthies. After over two hours, trying to prop myself awake, listening to endless queries about cycle lanes, planning applications for apartments, problems with leaf-clogged gutters etc., etc....my little item was eventually raised. Grinning, Cllr Lacey suggested that the plaque should remain in place because it was "a bit of madness, a bit of colour" and that the Council should just admit that they'd been bested and leave it in place. Well, that's one argument anyway.

There were a couple of half-hearted objections, from Cllr Mary Freeman (who didn't mind it remaining, as long as it didn't set some kind of precedent). Another councillor made inarticulate noises about vandalism and defacing our heritage, till it was pointed out to him (by Cllr Kevin Humphreys) that the 'hole' the plaque was inserted into was already there, a defacement committed by the Council itself, in order to install the Millennium Clock (a luminous digital clock in the Liffey that got the nickname 'the time in the slime'). The controls for the clock had been set into O'Connell Bridge. When the clock ceased to function properly and was removed, the workers left a gap in the stonework, which was utilised for the plaque to Fr Noise.

Here it should be stressed that the two artists (brothers?) who installed the plaque were anything but 'vandals'. This was the act of people who know and CARE for their city, people who notice such things as a little rectangular gap in the masonry of O'Connell Bridge (that the Council had evidently forgotten about) that had become a collection plate for crisp packets and dead leaves.

Thankfully, Dermot Lacey's motion was carried, so Fr Noise should have a fighting chance of remaining, though the Council may find a way to remove it surreptitiously. For one thing, I understand the 'coping stone' in which the plaque is set needs replacing. If the council remove it they might just 'forget' to replace the plaque.


Photos (from top): Karl with two members of the 'Friends of Fr. Pat Noise Society', a tourist (or possibly Trinity from The Matrix), another tourist. *PAT NOISE
May be a pun on Pater Noster (Our Father); apparently the portrait on the plaque is a likeness of the artist's actual father.

*HSTI
As Rosita Boland noted, HSTI can be read as an anagram for 'shit'. If that's the intention, it's slightly crass, the weakest part of an otherwise near-perfect creation. However, HSTI also suggests HIST, short for History. Google also turns up some acronyms: Homeland Security Training Inc, High School Technology Initiative and Hubble Space Telescope Inst.

*A NOTE ON PEADAR CLANCY
"The Heroic" Peadar Clancy (whom Pat Noise was an 'advisor' to) was far from fictitious. He was born in 1894 in Cranny, Kilrush, Co. Clare. When he moved to Dublin he involved himself in the Nationalist cause and joined the Volunteers. He was later promoted to Lieutenant after playing a prominent part in the Easter Rebellion. His own death was certainly 'suspicious':

"Two IRA men, Dick McKee and Peadar Clancy and an innocent citizen, Conor Clune, were killed on 21st November 1920, while 'trying to escape' from interrogation in the holding cells of the (night-time) Guard House at Exchange Court - behind City Hall which had been taken over for court martials. Their bodies are reported to have had tell tale signs of torture."

There is a monument to Peadar Clancy in Kildysart, Co Clare.

(information from www.clarelibrary.ie and www.dublincastle.ie)
Posted by Mark Granier at 4:04 pm

I am looking for readers opinions about authors blogging and the growing social input and collaboration that the web allows. There are a few initial questions in the blog post but any input would be great.

- thanks for your time.

You might consider the aptness, or otherwise, of these anagrams of Fr. Pat Noise:

My grandfather was found drowned in the Liffey at Eden Quay on 11 June 1918 but there was no talk of a coach or of how he got in there in the first place.

Thanks Polo. FAINT PROSE is a good one.

I'm sorry to hear about your grandfather's sudden death. I imagine a great many people have been found floating in the Liffey over the years. The walls aren't high; easy enough to topple in, accidentally or half-deliberately, especially if you've had a few or are depressed, disoriented or confused for any reason; and as we know, life offers a dizzying variety of reasons; its no slouch in that regard.

Once, on my way home from a party, I had to grab hold of a drunk girl who already had one leg over the wall. Perhaps she went back later to complete the process; or she may have woken up next morning with no memory of the event and thereafter lived a fulfilled and almost happy life.

The idea of a coach and horses somehow tumbling into the Liffey off O'Connell Bridge is certainly odd, fantastic really, a surreal and dreamlike image. Yet stated so matter-of-factly it has a certain poetic rightness. Where Fr Noise is concerned, I believe it could have happened no other way.