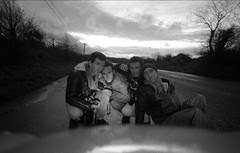 The Yahoo Road Co. 1993
Originally uploaded by southsidernotes.
I was going through some old negatives recently and found this photograph, taken in the early 1990s, on one of our road-trips around the border counties. In order to capture all four of us, I had propped my Nikon on the bonnet of Danny's car and set the timer. This was The Yahoo Road Co: myself (writer/photographer), Danny (photographer), Dave (photographer) and Pat (painter).

Anyone familiar with the work of Robert Frank or Josef Koudelka (to mention just a couple) will know how well photography and road-trips compliment each other. Naturally, the very idea of the road – that long, grey, riverlike kingdom ruled by all who are mobile – presents an exciting motif for artists and writers too.

The initial idea had been to travel up North and look for anything strange or startling to photograph, in particular the thriving Country and Western scene. After some debate it was decided that such a venture would be too much like Troubles-tourism, street-naivety masquerading as journalism. Instead, we opted to just take off on the occasional long weekend, whenever we could find time, driving mainly through the midlands and border counties, stopping whenever we saw something worth photographing (or painting / taking notes on) or just because we felt like it.

Of course, the word Yahoo has a different connotation now. Our modest enterprise had nothing to do with dotcom empires or information highways. We wanted a group-name that would carry some flavour of what we were about on the far less streamlined Irish highways and byways, some small sense of wildness and cutting loose, of backroads adventure. Oddly enough, some lines from the end of John McGahern's novel, The Pornographer, came to mind, where two of the characters are driving somewhere beyond the last page and one of them calls out (to the road itself) ""Yoo-hoo, Road. Yoo-hoo, Road. Yoo-hoo, Road. Yoo-hoo . . ." I changed yoohoo to yahoo partly as a gesture to our original impetus, a look at the C & W scene in the border counties (yeehaw!). Also partly to our sense of male comaraderie; these trips were about friendship as much as anything.

The closest we ever came to investigating the C & W scene was during a weekend when we were kindly put up for a few days by The Tyrone Guthrie Centre at Annaghmakerrig in Co Monaghan. From here, we arranged to visit the legendary Big Tom And The Mainliners, who were playing not too far away: a dim, half-deserted hall at the back of a pub in a Republican border town where we were regarded with hostile suspicion (West Brits with cameras and nervous eyes!), but that experience is a story in its own right.

Because of its immediacy, photography was the dominant mode. Painting came second, writing a distant third. Anything might catch our eyes: late sun slanting through a field, the kitsch-palatial gates of some millionaire's inflated bungalow, a junkyard with an angry dog on a loooong chain, an official-looking road-sign nailed high on a scraggly, ivied tree stating THE BORDERLORDS RULE. We would scan the local papers for interesting events: a massive disco in Monaghan where people came from both sides of the border, a St Brigid's Day Procession down dark country roads in Louth, female mud-wrestling in the bowels of some cheesy midlands hotel...

Though I've said that photography was the dominant mode, Pat's paintings were among the best works to come directly out of our loose, undisciplined rovings, his nightscapes from the Brigid's Day procession in particular. That simple, calendar event affected us all. Not that there was the slightest chance of any of us being converted (or reconverted) to Catholicism, but the hushed, crowded, intimate atmosphere made inroads; the memory still holds.

I produced a number poems relating to Yahoo Road, redrafting them over the years and eventually whittling them down to less than a handful, including the following sonnet, from my second collection, The Sky Road:

No sign of Faughart on the roadmap. Our dark
island kept itself to itself, one high-hedged bóthar
headlit, the same as another. Then, out of nowhere
it came to us, a long-acre of parked cars
we added to. Nothing to do now but go
with the cattle-press of the procession, its shuffle
a low-voiced, slow, inevitable river uphill.

Nobody minded us, unbelievers suspended in the flow
of candles and wobbly torch-beams. Our wariness lapsed,
shrinking as the night-eye opened. Passing a gap,
we heard softly trumpeted, familiar notes doodled
across clouded moonfields. Forgotten, remembered:
Faith of Our Fathers. As if it wasn’t if, but when.
And your whisper in my ear: “We’re going to Heaven.”
Posted by Mark Granier at 6:58 pm 2 comments: