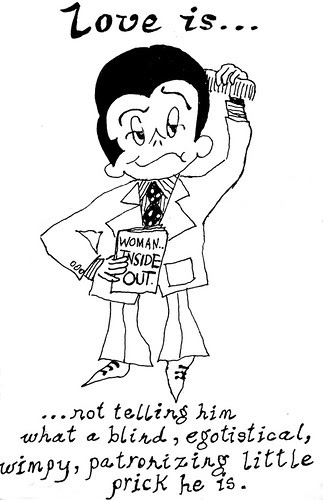 In the mid 1980s I sent this in to a magazine, where my girlfriend, who had recently broken it off with me, was working. She wasn't on the editorial board, so I hadn't addressed it to her. Anyway, they rejected it, as I imagined they probably would (my first effort, after all). She rang me about a week later, to ask if we could meet. This got my hopes up. Perhaps she wanted a reconciliation (the cartoon was the furthest thing from my mind). No, she wanted to know how I could be nasty enough to send in such a thing. What did I think I was playing at? I was mystified, almost speechless. Surely, if anything, it was aimed at men, perhaps even myself. Had I missed some vital clue, broken some grave protocol?

Eventually, she admitted that it was a fairly accurate portrait... of her current boyfriend. I had heard rumors about her seeing someone. I knew him to speak to, but not nearly well enough to make assumptions about his character. Even if I had, I would never have presumed to parody him (utterly pathetic, someone slagging, without provocation, his ex-lover's lover). Furthermore, he certainly didn't look like the John Travolta wannabe in my drawing; if anything, his attire was the opposite: permanent student-drab, rather like myself. I burst out laughing, and continued till my ex asked me to shut up.

I was stupid, of course. A satirical cartoon, sent to an ex-lover's workplace, is going to damn well look like some kind of message, no matter how obscure or unlikely. And, as luck would have it, this one didn't seem obscure at all.

We've had a friendly enough relationship since, though we rarely meet (she doesn't live in the neighborhood any longer). I hope if she ever reads this she'll forgive me for airing it. I believe the joke was on both, or perhaps all three, of us.
Posted by Mark Granier at 6:24 pm 2 comments: 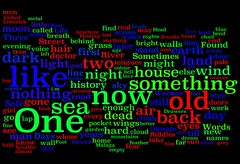 Wordle.net is a website that generates 'word-clouds'. That is, it takes whatever bunch of text you want to dump in it and turns this into a randomly arranged graphic word-picture. More interestingly, rather than using all the words in your text, it sorts out the less interesting chaff (definite articles, and, a, etc.) then, for the remainder, "uses the number of times a word appears in a text to determine its relative size." So you get a snapshot of how often you've used (or overused) a particular word. Sometimes this can be misleading; I altered my text (the MS of my latest poetry collection) when I realised that 'James Joyce' was one of the largest words, which would have given the impression that I had written a series of odes to the master, while in fact the name was simply repeated in one small poem.

If you don't like the fonts/colours or whatever you can get another design by simply clicking the 'randomize' button. So I tried a few till I found this. I like the colour and design, but most of all the random 'poem' top left:

You can then exhibit these little concoctions in the online gallery or on your blog (the instructions are in the FAQs).

So how about that? Properly postmodern randomness, DIY "visual poems" far better than those I've come across.
Posted by Mark Granier at 4:02 pm No comments: 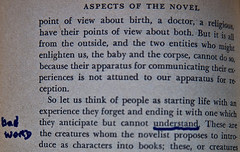 I like finding handwritten comments in the margins of old books, especially if these spontaneous notes are, potentially, more interesting than the text.

When my friend, the poet and music teacher Anthony Glavin, died three years ago he left me his books. Many volumes of poetry of course, (a library within a library), but also music, art, biography, philosophy… and a good deal of literary criticism.

He often wrote comments in the margins: questioning, reprimanding, elaborating, etc. He also underlined, copiously. Reading or idly skimming some of his books, I have often compared what he has marked or underlined with my own marks/annotations, or ones I might have made had he not got there first. So a space opens for an imagined dialogue, an agreement or argument, a species of communication.

This morning I picked up a paperback copy of E.M. Forster’s ‘Aspects Of The Novel’ (immaculately preserved, the only damage age itself: air and light leaking in from the tea-coloured edges). On the title page, a 20-year-old Anthony had written in black marker, in his elegant, neat-but-unfussy handwriting:
Anthony Glavin.
Dec. 1965.
Eblanaid.

That single word in the third line is interesting. I presume it refers to the long-vanished Eblana bookshop on Grafton Street, a tiny but well-stocked Aladdin’s cave that specialized in literary publications, particularly poetry. Anthony seems to have rendered the name as a verb: Eblanaid, as in: acquired in the Eblana bookshop. This is in keeping with an aspect of his sense of humour, which I greatly miss: obsessive wordplay.

I am not certain what Anthony thought of Forster’s book, since he never discussed it with me, but I imagine him becoming impatient with the rather orotund and professorial style, which employs the majestic plural (perhaps fashionable in 1927), and I can hear him snorting derisively at the vague but elaborate scenarios Forster dreams up with all the enthusiasm of someone warming to a theme that isn’t.

At the top of page 21 (by which point Forster is well into his “ramshackly” rambling about scholarship, pseudo-scholarship and genius), I found what amounts to a condensed, scathing review: “The novel as abstract, unrelated creation, separate as a stone or hypothetical ant-heap on a far distant planet. Rubbish!” Later, at the bottom of page 37 (in blue marker this time) Anthony has written “Beckett; Krapp & Malone”, followed by an exasperated double-question mark, and with an arrow jabbing upwards at the belly of this sentence: “All these devices are legitimate, but none of them contravene our thesis: the basis of a novel is a story, and a story is a narrative of events arranged in a time sequence.”

However, it was a much smaller note in the margin of page 57 that caught my imagination and set me to writing this blog. Forster begins a paragraph thus: “So let us think of people as starting life with an experience they forget and ending it with one which they anticipate but cannot understand.” As you can see from the photo above, Anthony has underlined “understand” and written in the margin “bad word”.

Is it a bad word? Coming at the end of that sentence, it might seem a little inadequate, though hardly erroneous. After all, we can claim to understand death, both as a concept and viscerally, shatteringly, through grief. And if we live long enough, at some stage in our lives, usually around middle age, Martin Amis’s “information” arrives, that confrontation with mortality which (for any halfway contemplative person) is part of the package, a truly ‘done deal’. Would you deny that the speaker in Larkin’s ‘Aubade’, waking “in soundless dark” in the early hours, understands his “unresting death, a whole day nearer now”?

Anthony was not religious, so his objection to Forster’s chosen word rested solely, I believe, on what he considered its inappropriateness. But would any word be appropriate, or adequate? What word or words might better encapsulate our ignorance of what Larkin termed (apparently in his actual last words) “the inevitable”? I thought of one word but I am not convinced that it is much better, and it may well be worse. I won’t say what it is yet, only that it is difficult, and perhaps impossible, to find a full rhyme for it.

Between page 11 (where the book begins) and 57, Anthony left some kind of mark on 16 pages, whether it was half a page of meticulous notes or just one underlined word. After that, perhaps he became too bored to finish the book, or perhaps he skimmed it or put it down and forgot to resume it, because those two words in the margin of page 57 are his final written verdict on ‘Aspects’. The rest of its 115 pages are unmarked, pristine.

Here’s Forster’s sentence again, with the last word removed:
“So let us think of people as starting life with an experience they forget and ending it with one which they anticipate but cannot ____________.” If you can come up with a better word than “understand” I invite you to comment and fill in the blank.
Posted by Mark Granier at 12:15 pm 14 comments: