Throw It Away, Why Don't You? 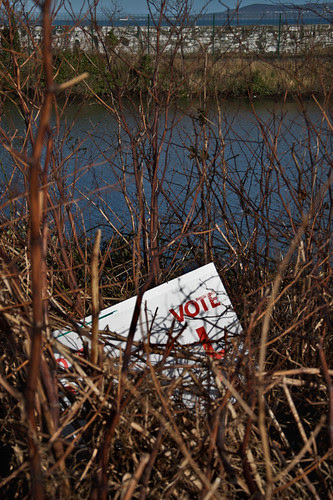 What is a short memory good for? Forgetting.

Forgetting that part of our problem is our gullibility.

Forgetting that 'liberal economic policies' are what landed us in this.

Forgetting that our innate conservatism (in thrall to the banks' and big business's Happy Hour) is what landed us in this.

Forgetting that FG's pride in 'fiscal rectitude and minimal government interference' (not to mention 'liberal economic policies') should make our scalps creep and our hair (if we possess any) stand on end.

Forgetting that it's high time to change the channel.

Forgetting that, if we do not change the channel (or at least modify it), we may get what we deserve: a FG government who have a mandate to do whatever they they like.
Posted by Mark Granier at 12:04 am No comments:

A Place On A Map 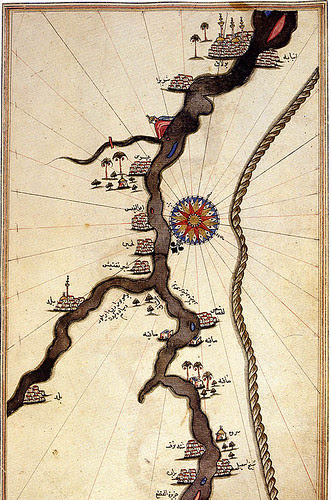 Reading Katy's blog today, about the recent events in Egypt, I found myself commenting rather extensively, so felt it might be more pertinent to say my piece here, since this is not only a blog, but also functions as my personal journal, my space for disentangling thoughts.

Not that my thoughts are going to amount to very much. Egypt, whether in its present incarnation or as depicted in the 15th Century (above) is, for me, a place on a map. I've read some travelers' accounts (or I think I have, though I can't recall them) and seen numerous programs about the Egypt of the Pharaohs. I love Cavafy's poetry, and in my 20s I raced (and waded) through Durrell's Alexandria Quartet. But I know next to nothing about Egyptian politics or people.

Mubarak's was, apparently, a horrifyingly corrupt and brutal regime, so good riddance to it. At least 300 people have been killed, but an objective has been achieved; a government has been overthrown by the very people it had thought to govern for perhaps another 30 years. And now what? The Muslim Brotherhood (slogan: 'Islam is the solution') is in the wings, or close to the stage. Should they step into the spotlight, are they likely to bring in a more egalitarian society, or go the way of Iran and steer the revolution into a narrow, airless cul-de-sac?

Katy also posted this moving Youtube vlog by Asmaa Mahfouz, who is said to have helped 'spark the revolution'. Asmaa is earnest and passionate (and her delivery seems, to me, to have some of the chanting, incantatory music of a poem). Although she begins by mentioning how four men burned themselves in protest, I like the way she insists that people should NOT burn (i.e. 'martyr') themselves, but simply come onto the streets and support each other. The only thing that distances me slightly (due to my own cultural tics and reservations) are the references to peoples' 'manhood' and, finally, God.

One of the commentators on Katy's blog wrote: Bless the martyrs. Really? What I would wish, if I felt qualified to wish anything, is that the Egyptians somehow wind up with a society we might call democratic (botched, battered and degraded as that word is); a society, in any case, is which martyrdom doesn't play a part, is, in fact as alien to the citizens as the repressions of the police state they are struggling to emerge from. I would also wish for widespread empathy and a tolerance that extends to those who have no religion: the atheists, the agnostics, the hopelessly befuddled or those who barely give a thought to such things. I would wish for the wonderful scope and sanity of human scepticism that recoils in disgust and utter contempt from repressing or persecuting anyone merely because of their race, politics, gender or sexual orientation (or religion). Something along those lines anyway; if I had anyone (or thing) to pray to I'd pray for that, or for the whopping dose of good luck that is long overdue the Egyptians, not to mention the Bahrainis, Iranians, Libyans, etc, etc.

Photo from Wikipedia: Nile River Valley and the city of Bulaq, as seen by Piri Reis, a Turkish admiral, geographer and cartographer who lived from 1465 to 1555.
Posted by Mark Granier at 1:21 pm No comments: