Do Reindeers Have Magic Legs? 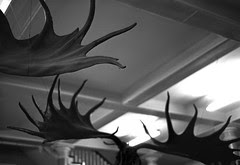 That's the question our five year old recently asked (it being the time of the year that's in it). And it would have been even more charming if he put it to us over breakfast rather than waking his mum in small hours.
Posted by Mark Granier at 7:27 pm No comments:

The Goat On The Roof Syndrome 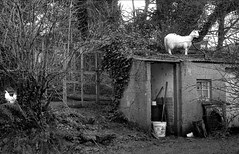 I hadn't thought about this for awhile. About twelve years ago I house-sat for friends of mine, TP and his family, who had gone to visit relatives in Australia. Their home was an ancient little cottage at the foot of the Sugarloaf (it was called, appropriately, Bun-a-tSleibhe). Here they kept some chickens and goats; also Jack, a white and grey cat that behaved rather like a dog, and Bunter, a Jack Russel that behaved rather like a cat (or occasional lap-dog).

One morning I looked out the kitchen window and saw something that made me grab my camera (see photo above). It wasn't only the oddness of the goat, but the happy symmetry of the goat and chicken, heraldic, back to back, that touch of Chagall surrealism. The phone rang. I put down my camera. It was my then girlfriend, Paula. When I began to tell her about what I was looking at she interrupted me excitedly. She had just had a session with a psychic: palm, tea-leaves, etc. (a woman from Crumlin, one of the best apparently). According to Paula, the woman 'saw' something in the tea-leaves that puzzled her: 'Someone who is close to you... he is in some place where... there are animals all around... strange... I don't understand... I am seeing an animal... on a roof...not a cat... an animal that should not be on a roof...' That's paraphrasing of course, but the psychic's 'vision' was at least as oddly precise as that.

I called up Paula half an hour ago to confirm some of the details. We chatted for a bit about things, not necessarily super (or un-) natural, just incidents that stick in the memory. She mentioned a couple of recent ones: wood-pigeons flying overhead in the twilight suddenly, briefly under-lit by a sparky streak of light: a meteorite. Also recently, in this unusually wintery winter, a robin on a fence-post she had kept her eye on for some time, fascinated to note what the freezing air made of its thin little puffs of bird-breath.

But what did that odd, seemingly precognitive, animal-on-the-roof vision mean? Nothing, I imagine. People who read tea-leaves probably chuck in a wealth of odd, extraneous detail in the hope that something might stick (and the knowledge that what sticks is what will be remembered). Anyway, I don't have much truck with psychics, partly though disbelief/disinterest and partly my own brand of superstition. The latter reaction is encapsulated in the following (part of a mini-sequence that doesn't seem to be going anywhere):

No one has read my palm.
I won’t let them.

Not that I believe those lines
more meaningful than canals
on Mars, but to display
the soft pink valleys, how they
might read to a strange-eyed stranger:

And how long’s a frayed piece of string?

What brought these things to mind was a recent post (Dec. 21) by Georgiasam. It's longish, meditative, honest and eloquent piece, set off by (among other things) the word 'mystic' in a favorite poem by John Clare and some remarks by the novelist Hilary Mantel, who pointed out '...the similarity, on one level, between psychics and writers (both hear voices, both make the dead speak), she insisted that the authenticity or otherwise of her medium, Alison Hart, was not the principal issue in the book.' To which Georgiasam responds: 'Psychics and writers are indeed alike, with the one simple distinction that psychics are nauseating frauds (cue reprise of the Dara O Briain routine about ‘bogus psychics’, as though the bogus ones were going around giving the genuine one a bad name, as if all psychics are not total frauds).'

The O'Briain crack (which I think I've heard before) made me grin. And I almost completely agree with that hand-dusting dismissal of psychics (and the rest of the fairytale wardrobe). The only thing holding me back is just one dancing molecule of doubt; doubt at any absolute certainty besides the utter weirdness of being here in the first place. As Terry Pratchett sardonically put it: 'In the beginning there was nothing, which exploded.' Yes, the fact of apparently spontaneous creation is at least as fantastic as any creation myth or Pratchett's fantasy/Disc-World novels. It is not that 'there are more things in Heaven and Earth', so much that the things themselves, the sheer floridness of the flora and fauna, and the apparently unassailable fact that these (and I/we) non-existed for bottomless eternity before the big birthday-bang, the abrupt unfolding, the accelerating burst, the cooling gases, the stardust and 'carbon compounds'... till, hey, here we all are.

This is not, incidentally, an apology for the pseudo-science of 'Creationism', a pathetic bid for respectability whose promoters I really do consider to be 'nauseating frauds'. I am not in effect saying 'gee, it's all so complex there MUST be a Man with a Plan.' There is no reason why our wish for 'something else', for Milosz's bird on a branch to be anything other than a bird on a branch, should actually radiate beyond the tiny human sphere of expectation, desire, faith, forlorn hope... I readily acknowledge that my own molecule of doubt is probably composed mostly of wishful thinking and hedged bets, and perhaps it deserves nothing but contempt. That said, nobody has to answer to anybody else for his or her beliefs (or lack of them). Neither an atheist nor a priest (nor, for that matter, a scientist) should be expected to adequately explain to me 'the million-petaled flower of being here'.

I have met people whom I trust who say they have seen ghosts. My own encounters with the apparently softer edges of science are far less convincing (not that seeing ghosts need convince one of anything). A psychic who read my goat in tea-dregs, a bogeyman's silhouette looking up at me (as if waiting) when I drew aside the bedroom curtains in the small hours, a Courtmacsherry statue of the Virgin that shifted enough to almost give me the finger... These can easily be shrugged off as substandard coincidences; sleights-of-the-eye (or brain). They prove nothing. But when such rare-enough incidents occur they can leave a delicious, lingering tingle. I prefer not to dismiss them out of hand. Meaningless synchronicity, syndromes of the sheltering self... whatever they are, they are there, like everything else, to be savored: like the meteor-lit wood pigeons, the ectoplasmic ribbons of robin-breath.
Posted by Mark Granier at 10:18 am No comments: