The Sky Road Hits The Road 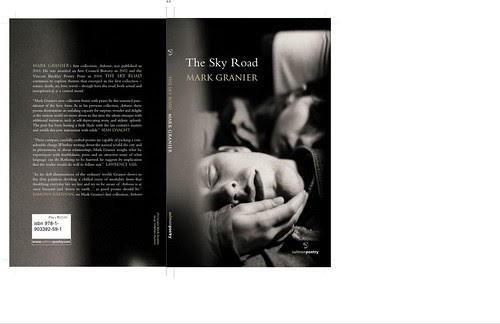 My second collection of poetry, The Sky Road, was launched yesterday by my good friend, the poet Yvonne Cullen. Poetry Ireland organised the venue, the old Unitarian Church on St Stephen's Green in Dublin, a lovely, solid, cosy little church, with very nice stained glass windows. I noticed on the way in that someone had left out a number of glossy, well-produced pamphlets of The Gospel according to Mark; an auspicious sign.

The turnout was good (for a reading), the wine flowed freely, and I think most people enjoyed the event; at least I didn't detect any ominous symtoms, such as that dreaded sense of anticlimax, the uncertainty to (as Paul Durcan put it) "clap weakly or weakly clap." After the reading, Sam generously took the wean home to bed, and a crowd of us went to the hotel nearby for grub and booze (I ordered steak). My two ancient friends/cousins Pat and Dave, caught the LUAS (a kind of tram) with me back to Sandyford, though we got off too early and ended up walking in a persistent drizzle till we got hold of a taxi.

As with my first collection, Jessie Lendennie of Salmon Poetry and her designer Siobhán Hutson, accepted one of my own images for the cover. I am particularly pleased with this one (from a photo I shot nearly 15 years ago, of a couple asleep on a Wicklow bus). I believe Siobhán's design and choice of font is perfect.

The book is now available in Dublin bookstores (e.g. Books Upstairs on College Green) and on the Salmon website: HERE


Here's three poems from the collection:


Before And After
for Samantha and Simon

I think of what’s now in hand –
the stubby, white plastic wand

you drew from your handbag to show
(in its recessed, thumbnail window)

a skipped heartbeat, a stone
out of sight, over the known

peaceable old horizon
I had rested my eyes on.

Now he is sounded, swept
into webbings of light,

restless, more and less real,
metaphors on a roll,

none clearer than the top
of his skull: oval, a raindrop

let go, falling on course,
eye to eye with the Earth

dreaming up sun, moon, stars
in its hammock of waters.

His lopsided, premature smile
is a quiver of pain. He is all
there, solid, a touchstone
in touch, a part of the main.

This is how I find he has nosed
his spreading taproot down
into my days.
I come to
in my old pose, at a window,
lightly swaying from foot
to foot,
as if nursing more
than a paperback (his warm bulk);
surprised to find our rock-
abye rhythm – the day itself,
gentled,
cradling my old head –
even in prose.

There will be time for one
last night on the town,

a warm lounge branching off
a dark side-street

and later, much later, a fleet
of missed buses, unhitched lifts

(to one of those all-nighters
of our dreams),

leaving us, as we were,
not quite at a loss,

possessing our keyless chain
to the closing city,

its warren of locked doors
and washed-out stars –

or, after all, make tracks
through the abandoned heart

My shout. And then we’ll go
get ready to make a start.

is wakening there in the roots of bright green moss

coppery cool, our soft hands parted for rumours
of newts, mud-backed, with sunrises on their bellies,
air flicking and flicking its dragonfly lures;

in the first big fear – Fire – I took in hand
with one fat yellow crayon, slowly, deliberately
scribbling the bland page to a big-mouthed roar;

in the lines of a first poem stumbling into my head
on a blood-hammering climb up a steep hill into the blue
sun: the small song of the beast that might love the impossible...

in the high of takeoff, cloud-wrapped tissuey light
of Dublin, tilting and shrinking, ungathered history
of rucked ashgreen, spilt houses, the lost thread of the road;

in Hubble’s random ‘grain of sand held at arm’s length’
blown to a three-page spread in the National Geographic,
a black beach grainy with old lights, starspawn, the firmament;

in the sure touch of certain rounded stones, Bray beach
blue with the last dark, clicking under my shoes,
and, Yes, the dancehall swirl of the first girl whose tongue tipped

my own, intimate, blown kiss at the cosmos.
Posted by Mark Granier at 5:26 pm 5 comments:

One Of The Houses 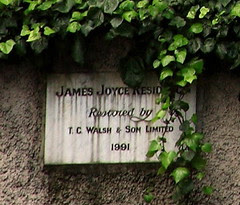 ONE OF THE HOUSES
JAMES JOYCE LIVED IN,
ONCE