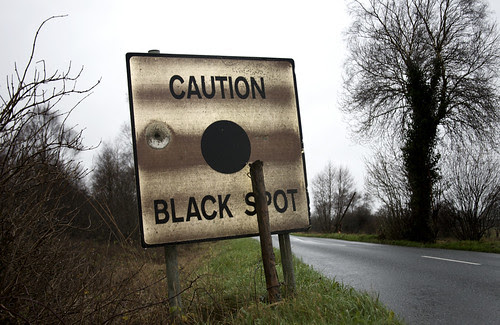 Last night I stayed up too late watching an Horizon programme I'd recorded, 'Who's Afraid Of A Big Black Hole?' Some stuff I've read or heard of before, such as that super-massive mother at the heart of our (and every other) galaxy. Various scientists (physicists, astronomers...) spoke about how black holes are still the big question, the place where the laws of nature break down, where quantum mechanics (the science of the very small) meets gravity head-on. One Asian physicist with leonine white hair declared that the physics of black holes had to somehow incorporate infinity (that toppled, recumbent figure of eight dreaming its twisted dreams), which was 'a nightmare' (and not just one infinity/nightmare, but an infinite string of them). But you could tell that he was delighted by this, the nightmare was a whopping good one, maybe the best ever, and this relish was evident in the smiles and voices of everyone they interviewed. People who (rather unimaginatively) imagine that scientists are cold, cut-and-dried Grangrinds or statistic-spouting caricatures, should be made watch this kind of programme. I wish I had the brain to follow it all but I don't care. I LOVE this shit. As DH Lawrence put it:

I like relativity and quantum theories
because I don't understand them
and they make me feel as if space shifted about
like a swan that can't settle,
refusing to sit still and be measured;
and as if the atom were an impulsive thing
always changing its mind.

So far, the only poem I've written in which a black hole features is the following, a short comic sequence:

A good thing to gaze at: your lover’s
thimble of dark.
.

See you at two, at the deep-shallow pool.
.

Vestibule
for nothing more than the tip
of a finger or tongue, graze
of a stranger’s guiltless eye.
.

A mystery: the way yours is a magnet for fluff.
.

Everyone to their own
free-floating punctuation.
.

In the window of the tattoo parlour, a photo
of a sailor’s encircled by boot-prints
and the words Navel Patrol
.

Forget the skewered eyebrow or chin,
the silver stitch in the lip,
the harpooned tongue.

Here’s the best place for sinking
that re-engagement ring.
.

Stop looking at me there.
It tickles.
.

Maybe to say: I exist ––
last of the bathwater’s dervish,
bullseye
at the heart of the galaxy –– a well-spun
birth-story with a twist.
.

Posted by Mark Granier at 6:20 pm No comments: 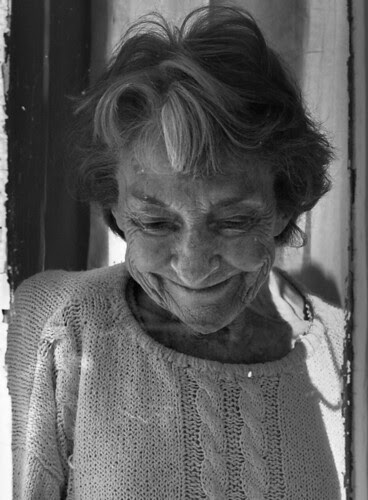 My mother died at ten past one this afternoon, in a nursing home in Dalkey. She was 93. Euphemisms aside, her 'passing' actually was peaceful. Over the last decade her osteoarthritis had worsened; she had become house-bound, then room-bound, then essentially chair-bound, her world shrinking. Recently she began to have trouble eating and drinking. She was very frail. They had moved her to a private room around two weeks ago.  My wife and seven-year-old son had just called in to see her. I think she knew they were there. She was able to make small sounds of acknowledgement and to respond when her hand was squeezed.

After they left, I was sitting holding her hand when I realised there was a change; her breathing, which had been fast and shallow, was slowing. Her hand was unresponsive, lax. I called in the nearest person I could find, who happened to be Alice, the marvelous woman who runs the place. She brought in a couple of nurses, who were both efficient and warm, truly caring professionals (despite the fact that this would obviously be routine for them).

I could barely speak at first. One of the nurses brought me a cup of tea. I kept looking at mum, detecting phantom movements, as if she was still breathing, then I'd glance out the window at the view I have become so accustomed to, a row of neat, shingled bungalows running uphill along a little footpath beside the nursing home: back-gardens with wind still tousling the cabbage palms, blurry pale blue rips in the rushing clouds, inexorable life.

My wife and cousins (who also happen to be close friends) have been brilliant. Arrangements, phone calls, etc. have been made. I am writing this now partly because I am unsure what else to do with myself.

Mum was second eldest in a family of seven. She often said she was always 'the peacemaker'. She never married and I grew up with my grandparents. Though I believe she was a popular and stylish young woman, by the time she settled in Dublin her circle of friends became small, mostly family (two sisters lived nearby). As her parents aged, she became their carer, as, eventually, I became hers. She was a very loving mother, immensely kind and gentle. And now the world is minus her.
Posted by Mark Granier at 10:57 pm 6 comments:

Embracing Dickens (on his 200th birthday) 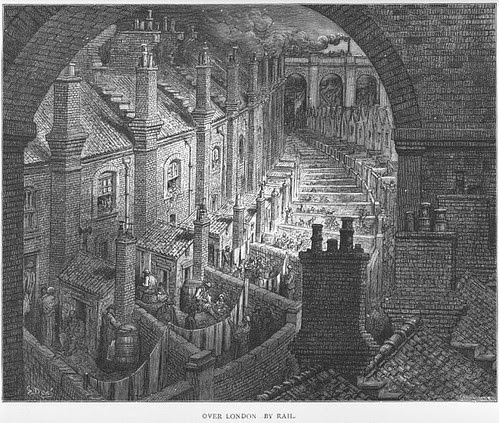 
Like Nabokov's, T.S. Eliot's enthusiasm is infectious. He introduces Bleak House with the following passage, which I have sometimes used to demonstrate prose rhythm in creative writing classes:


London. Michaelmas term lately over, and the Lord Chancellor sitting in Lincoln's Inn Hall. Implacable November weather. As much mud in the streets, as if the waters had but newly retired from the face of the earth, and it would not be wonderful to meet a Megalosaurus, forty feet long or so, waddling like an elephantine lizard up Holborn Hill. Smoke lowering down from chimney-pots, making a soft black drizzle with flakes of soot in it as big as full-grown snowflakes--gone into mourning, one might say, for the death of the sun. Dogs, indistinguishable in mire. Horses, scarcely better, splashed to their very blinkers. Foot passengers, jostling one another's umbrellas, in a general infection of ill temper, and losing their foot-hold at street corners, where tens of thousands of other foot passengers have been slipping and sliding since the day broke (if this day ever broke), adding new deposits to the crust upon crust of mud, sticking at those points tenaciously to the pavement, and accumulating at compound interest. [end of quote]


There's a swatch of The Waste Land here. That one-word opening sentence reminds me of  the the first line of The Burial of the Dead, whose short, incantatory 'Unreal city' is due to Pound's surgical excision (the original wishy-washy opening was: 'Unreal city, I have sometimes seen and see...').


Another Dickens passage I love is from Little Dorrit, a marvelous description of funereal church bells tolling over thousands of houses (or 'lairs'), 'frowning as heavily on the streets they composed, as if they were every one inhabited by the ten young men of the Calender's story, who blackened their faces and bemoaned their miseries every night.':

The playfulness –– those touches of grim, anthropomorphic humour –– are pure Dickens, bible-black but illuminated with what Tobias Wolff' called 'synaptic lightning.'

My grandfather didn't offer me tawny port when he had me sit beside him each day to to read aloud large doses of David Copperfield. These sessions took place in the dining room, with its oversized oak table. The drawing room might have been preferable, as it was at the south-facing front of the house and therefore warmer. But grandmother might be there, sitting by the gas fire watching TV or in her rocking chair in the bay window. Whereas the dining room, in between meals, was grandfather's domain, his smoldering-coal-fire-cigar-scented refuge. Such dutiful readings might have put me off Dickens, though it's more likely they fed my burgeoning appetite for exhibitionism (or performance –– if I was less lazy I might have had a proper try at acting). In any case, I am grateful to grandfather, and to Dickens, so happy birthday!


NB: The picture above is one of Doré's engravings, from his book, London, A Pilgrimage (Dover Pictorial Archives)
Posted by Mark Granier at 5:30 pm No comments: