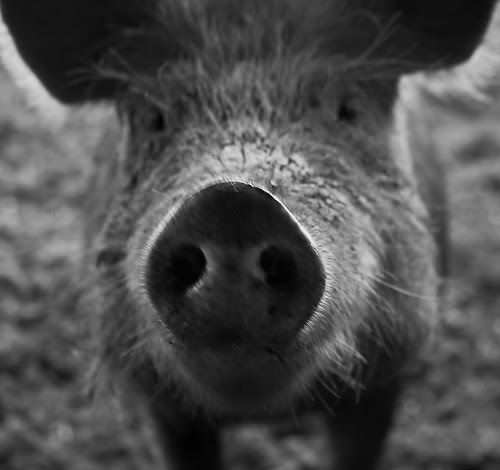 To call someone who has committed some atrocity 'an animal' is a gross insult to all our fellow fauna. Human is one thing, humane quite another.
Posted by Mark Granier at 6:01 pm 1 comment: gets down on his knees
in some corner of a cathedral, not to pray but see

if there’s a speck, a bloom, a trace,
or if the infernal place

is as emptied of history
as London’s National Gallery or the Uffizi.

Out of ‘all these actions that took place here’, his eye falls
on anything at all

for the scanning electron microscope: his Rose
Window on the genius

of what escapes us.

*Wolfgang Stoecker ‘My Empire of Dust’
Posted by Mark Granier at 1:51 pm No comments:

Of A Man, Falling 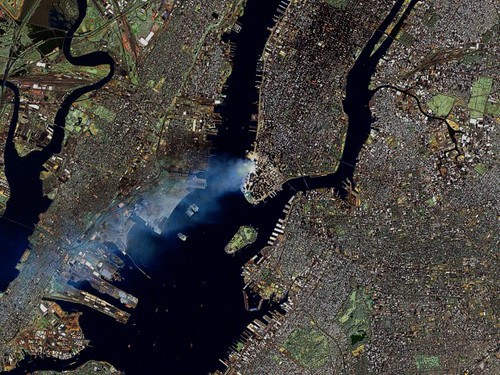 has come untucked – he might
be attempting to pass

the one-leg-stand test
or lounging, between drinks,

at a party, his back
braced by a wall, if

the world had not turned
him upside down

into the plummet
of streetwindowsky,

the brain in its cockpit – flight
the flight of his thought

a ten second freight –
for all we know

Image 'September 11 from Space', from NASA
Posted by Mark Granier at 6:16 pm No comments: 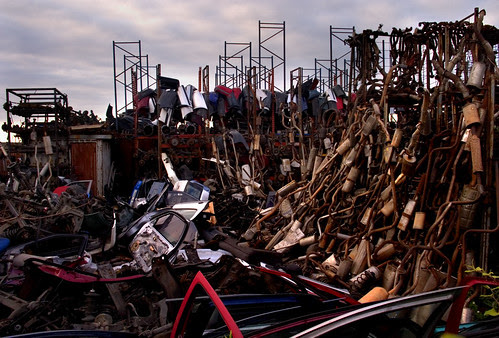 Some Epigrams and Aphorisms

Speaking ill of the dead is one of the surest ways of keeping them alive.

My grandfather could never master driving, but was a great believer in hitching, especially in his old age. To hitch a lift was to marry two of his pet delights, thriftiness and talk. Getting from A to B was strictly secondary; a car was a vehicle for the captive audience.

Project ‘Iffy’: to refashion Kipling’s most cherished (and possibly worst) poem. The first stanza might begin:

Never mind keeping your head, if you’ve some idea
Where heads are located, while idiots who haven’t a clue
Are scrambling, rifling the dictionary, the fridge, IKEA…
Then blaming their headless-chicken-shit on you

God is not Great

says Christopher Hitchins. I say
god is great, only
with a small g
and atheism with a small a.

Memo. Beware taxi drivers who talk politics. Especially those who announce ‘I’m voting BNP’ and follow this by declaring ‘They should pull the shutters up!’[sic] These are the kind who may curtail your incredibly naive attempt to discuss such matters with a Travis Bickle glare and the accusatory conversation-stopper: ‘You’re toying with me mate, you’re toying with me!’

Racism is the refuge of the deranged sheep, the kind that has managed to furiously pull the wool into its own eyes.

we can set aside as easily as the cat its fur-ball,
the hedgehog its ticks.
Just remember: any creature can scratch, bring up its gall.

On Radio 4, a woman on the joys of wandering naked in a garden with fellow ‘naturists’, sniffing the roses etc. As if, while enacting a reversal of Adam and Eve’s shameful discovery, they might forget to notice each other’s nakedness. And that is what naturism is: dressing for indifference, as if this were, somehow, a virtue.

Unless it is intended to remain hermetic, I think the worldlet created in any given poem should have at least some aspect of the familiar. But its greater obligation is to provide the Three S’s: Surprise, Surprise, Surprise.

To condemn the wide-eyed, well-balanced poem for staying on the fence
that is its glory
makes as much sense
as reprimanding a novel for telling a story.

Auden (who sang the praises of the permeable limestone landscape) called poetry ‘memorable speech.’ I think great, or even just good, poems should have at least an element of this; they should resonate in the way that a good song or piece of music does. If they manage that I will forgive them much, including a good deal of impermeability.

Historical irony should come tempered with humility. What Milosz called ‘praising art with the help of irony’ can ruin a poem. And weak irony, the smirk behind the frown (or behind the scream, in silly movies such as ‘Fright Night’) is good for nothing but guffaws. Yet irony is the iron in literature’s blood. Life itself is intrinsically ironic, its brightening flare never quite touching the end of the bricked-up tunnel.

Having long since bypassed the old distillery,
we overshot the bypass. These days
most tributaries are in a hurry
to forget how to praise.
Posted by Mark Granier at 11:01 am No comments: