Return of The Cat People

Toby is a tom-kitten: chocolate-grey, slightly fluffy, a bit yowly and attention-seeking in the mornings, given to sudden manic dashes, but otherwise sleeps most of the afternoon, and he doesn't seem to mind the wean too much. Most importantly, he's a people kitten. That is, he likes being stroked and making like a lap-cat.

My wife's brother saw him wandering around on a traffic island off the main Wexford road. When he pulled in and approached, the kitten ran away. He gave up after a little while, only to realise that the kitten was following him back to the car. So he gave the critter to my wife for her birthday. She is delighted. So am I. So is my mother. I like the name Toby, too, though it can get mixed up with the Toby from Thomas The Tank Engine, our son's current favourite (DVDs, toys, t-shirts, shoes, pyjamas...).

It is about 16 months now since I found my wife's cat Sophie stretched out by the side of the road. She was already past middle age (her 'grand climacteric') when she came here and she did well to survive a few years on this manic rat-run through the leafy suburbs. We're planning to keep Toby indoors for a while, till he grows up a little, and hopefully grows somewhat calmer, at which point we'll encourage him to use the back door (giving onto the the safe, weedy gardens), rather than the front, with its steps straight down onto the cars' sacrificial long, grey altar.

This may be the only time I post anything that could be said to belong to that greeting card genre, 'The cat poem', but this seems a fitting occasion. Here's four. The first two (of which only the second is 'about' a cat) are by me. 'A Familiar' is from my recent collection, The Sky Road:

Shadowy desire,
for ages now we’ve been keeping
a place for you. Are you dead?

No, I’m still here.
Feel and you’ll find me sleeping
at the end of your bed.

Our fingertips know what to ask for.
After helping dress the day
in its familiar surfaces
(clothes, doorknob, steering wheel, bannister-rail...)
they need you like sleep.

Entering the flow of your fur –
tingly pure electric gift –
each short stroke
is an unconscious cadence shaped
by the rising angle of your tail.

Turned on, your idling motor
is the absolute sound of pleasure.

Show us how to trace the current,
teach us to purr.

Of the following two poems (both addressed to elderly cats), the first, by Edward Thomas, is probably the stronger. It is certainly the tougher. Its rural sourness is kin to the later (R.S.) Thomas's poems about the Welsh countryside; a poem about trees contains the injunction: "Cut them down". The cat in Edward Thomas's poem is a world away from cosy 'Old Possum's book; the drowned kittens remind me of Heaney's 'scraggy wee shits' and the 'god' in the final line sounds coldly ironic. But it's the final poem, by John Keats, that I am fondest of, even if it does border on the sentimental:

She had a name among the children;
But no one loved though someone owned
Her, locked her out of doors at bedtime
And had her kittens duly drowned.

In Spring, nevertheless, this cat
Ate blackbirds, thrushes, nightingales,
And birds of bright voice and plume and flight,
As well as scraps from neighbours’ pails.

I loathed and hated her for this;
One speckle on a thrush’s breast
Was worth a million such; and yet
She lived long, till God gave her rest.

Cat! who hast pass'd thy grand climacteric,
How many mice and rats hast in thy days
Destroy'd? -- How many tidbits stolen? Gaze
With those bright languid segments green, and prick
Those velvet ears -- but pr'ythee do not stick
Thy latent talons in me -- and upraise
Thy gentle mew -- and tell me all thy frays
Of fish and mice, and rats and tender chick.
Nay, look not down, nor lick thy dainty wrists --
For all the wheezy asthma, -- and for all
Thy tail's tip is nick'd off -- and though the fists
Of many a maid have given thee many a maul,
Still is that fur as soft as when the lists
In youth thou enter'dst on glass-bottled wall.

"Pr'ythee do not stick thy latent talons in me!"

A great fuckoff line, no? An invitation to a list on a glass-bottled wall.
Posted by Mark Granier at 2:53 pm 2 comments: 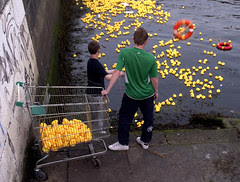 Overheard on the radio. A Dublin woman in a vox pop about Bertie and the Mahon Tribunal: "If he fell into the Liffey he'd come out dry."
Posted by Mark Granier at 2:08 pm No comments:

When A Pigeon Is Not A Pigeon 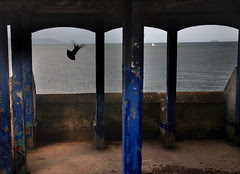 James Thurber wrote a retort to this in his little piece "There's An Owl In My Room". Here's a couple of extracts:

"It is neither just nor accurate to connect the word alas with pigeons. Pigeons are definitely not alas. They have nothing to do with alas and they have nothing to do with hooray (not even when you tie red, white, and blue ribbons on them and let them loose at band concerts); they have nothing to do with mercy me or isn't that fine, either. White rabbits, yes, and Scotch terriers, and blue-jays, and even hippopotamuses, but not pigeons. I happen to have studied pigeons very closely and carefully, and I have studied the effect, or rather the lack of effect, of pigeons very carefully. A number of pigeons alight from time to time on the sill of my hotel window when I am eating breakfast and staring out the window. They never alas me, they never make me feel alas; they never make me feel anything."

"From where I am sitting now I can look out the window and see a pigeon being a pigeon on the roof of the Harvard Club. No other thing can be less what it is not than a pigeon can, and Miss Stein, of all people, should understand that simple fact. Behind the pigeon I am looking at, a blank wall of tired gray bricks is stolidly trying to sleep off oblivion; underneath the pigeon the cloistered windows of the Harvard Club are staring in horrified bewilderment at something they have seen across the street. The pigeon is just there on the roof being a pigeon, having been, and being, a pigeon and, what is more, always going to be, too. Nothing could be simpler than that. If you read that sentence aloud you will instantly see what I mean. It is a simple description of a pigeon on a roof. It is only with an effort that I am conscious of the pigeon, but I am acutely aware of a great sulky red iron pipe that is creeping up the side of the building intent on sneaking up on a slightly tipsy chimney which is shouting its head off."

I empathise with Thurber, and I am of a like mind where pigeons are concerned, but I cannot agree with him (alas). I've come to realise that all things, pigeons included, are as alas as one finds them. I don't find much alas in pigeons, but a woman I worked with did; she hated them with all the spine-tingling horror most people reserve for hairy-jumpy spiders, bats and rats. She hated the arrogant way they assumed ownership of the streets and pavements, only lifting off at the last possible moment; the way their unclean wings whizzed past her ear. She told me how once she had had to hail a cab in a pigeon-infested area (Leicester Square, I think, where they used to be Legion). When a cab stopped she proceeded by waving her umbrella like a sword, shouting "Shoo! Shoo!" to clear the way. The smartass cabbie leaned out of his window and said: "Shoe? Sorry love, but that looks more like a brolly to me."
Posted by Mark Granier at 1:20 pm 1 comment:

'Prosperity' IS The Real Thing 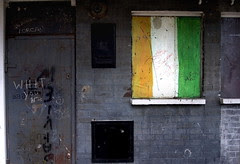 I may come back later and add more, but I just wanted to put in a plug for the new Irish drama, 'Prosperity', which I watched last Monday. I was glad to see that the Saturday Irish Times gave it a thumbs up. Lenny Abrahamson (director) and Mark O’Halloran (writer) are the team who gave us 'Adam & Paul', the unfolding of a grim, blackly comic day in the life of two Dublin junkies. Beautifully written, directed, acted and edited, that film was remarkable for its quiet but relentless focus on the wanderings these two individuals. Yet, up till the very end, nothing remarkable happens; yet the whole adventure is remarkable, human in the fullest sense of the word.

My cousin, who edited 'Adam & Paul', alerted me to 'Prosperity', which she has also worked on. The first one-hour episode, like 'Adam & Paul', involved quite a bit of wandering. Subtitled 'Stacey' (the name of the main character, a teenaged mother), it follows her through her day; leaving her hostel with her baby, visiting the mall (where she gets chatted to by a friendly security man), meeting her edgy, scuzzy boyfriend Dean (the dad), getting a talking-to by her bitter but wiser sister, meeting a guy with a beat-up face ("walked into a door") who asks if he can 'borrow' one of her cans of beer... and so on.

But this run-through tells you next to nothing. The directing, script and acting are perfect. There is an unobstusiveness, a tact and clarity that make 'Prosperity' the freshest thing I have seen in ages.

It is uncomfortable to watch in places, such as the scene in the cafe where Dean kisses shy, introverted Stacey deeply and intimately for far too long. Whether this is to humiliate her or get her aroused enough that she will ask her sister to babysit for an hour so that he can fuck her, or both, is not clear. You recoil because you have been given enough time to feel Stacey's vulnerability, her carefully applied mask, a makeup of silence and indifference. But this is as things should be; we should be able to feel Stacey's discomfort here and elsewhere, such discomfort being very much a part of who she is.

Watching 'Prosperity', there is a sense of something refined, a dramatic clearing where the usual paraphernalia has been removed. The characters are given real space to move in, 3D space, living space. The framing and focus are absolutely right. There are many close-ups. We notice Stacey's jewellery, the new hair-clip she buys, which a girlfriend remarks on but which is, naturally, way off the boyfriend's radar (Dean probably wouldn't have noticed if she'd dyed her hair green).

The similarities with Ken Loach's films have been noted. Some might think it pretentious that one of the reviewers in the IT mentioned Joyce's Ulysses. But I believe it is perfectly apt: that leisurly, wandering pace, deep-focus space and time in which odd details crystalise. I was reminded of Beckett. There is the ear for demotic speech (and more importantly, demotic silence), which he and Joyce shared. There is the waiting, mirrored by the resignation waiting in the wings, the black comedy. I was also reminded of Robert Altman, especially the first film of his I saw, 'Nashville', those parallel lives converging but in no hurry to do so.