On a minor / Major note 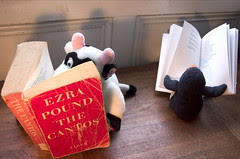 I recently got involved in a discussion on the subject of being, or wanting to be, a major writer. This itself was an offshoot of another subject, namely Reginald Shepherd's blog about his reasons for writing poetry: Why I Write. I withdrew when our comments seemed to be developing an accretion of misunderstandings. This was at least partly my fault, perhaps wholly so. I was too flippant. Who was I to presume to play the jester in another writer's court? And an articulate writer at that, someone with carefully considered things to say. Nevertheless, some of what I said still holds true for me. As Reginald noted, he and I have different viewpoints. His is perfectly valid, but I believe mine is too.

Like Shepherd, I too would like to think that what I write matters in some way, that it reaches people and (hopefully) moves them; that it might make a reader pause and catch his/her breath as some dormant experience is revitalised, seen anew. That's an exciting thought, that I could embody some essential part of human experience, detach and somehow reshape an eddy from the rushing confluence of life and language; make it real again, give it a coherent worldlet to breathe in. To me, that seems enough to aim for. When I come upon a poet who does this for me, such as Eamon Grennan, Eileán Ní Chúilleanáin or Yusef Komunyakaa, I never wonder whether I may be reading a major writer. Instead, I might (as Larkin put it) think: "That's marvelous, how is it done, could I do it?"

Anyway, I am a little mystified as to what, exactly, denotes a great or major poet or poem. A major poem is, I guess, one that pushes the envelope in some way; not only sitting like a "stone in the midst of all", but also continually broadcasting, sending ripples through the generations. Must a major poem be linguistically innovative, like 'The Wasteland'? I suppose Eliot's modernist enterprise must be major, though I do not understand that much of it, and I get impatient with poems requiring 'Notes'. I love the music of it though, the way it shifts its focus fluidly, like a living thing. I love 'The Four Quartets (more quietly enigmatic but wholly compelling and incantatory) for similar reasons, despite its religious overtones, its occasional high churchy sense of a persona-in-a-pulpit. I trust where these poems take me – their lines that whistle through my mind like a sinewy subway breeze – because they have the capacity to haunt.

I don't wonder very much about whether the poetry I am writing or reading is great. I prefer reading or writing the shorter forms, what one might call ‘suitcase poems’. If I am taken by a particular poem, I like to think that I might be able to carry it (a large part of it anyway) around in my head, like a good song, though of course this isn't by any means an obligatory requirement.

Andrew Motion recently declared that there were only four or five great poets of the 20th Century, one of them being Auden. Perhaps he’s right, but this sounds to me like the kind of sweeping, reductive statement that one often hears from writers trying too obviously to push some agenda. According to Eliot, "the really valuable part" of Andrew Marvell's oeuvre "consists of a very few poems". So should Marvell, or any poet who leaves only a handful of important poems, be considered a great / major poet? If Marvell had only left us one poem, 'To His Coy Mistress' say, would he deserve the title ‘Great’, and if not why not? What's so great about Greatness anyway? Something inside me (a little warning light) begins to blink when I hear a person or country being described as Great: Great Writer, Great Leader, Great Britain. Thatcher was probably a Great Woman, in the same way that World War 1 was The Great War.

Is Greatness the same as Majorness? Pound's 'Cantos' probably qualifies as major, but is it a great work? His imagist gems are the ones that stay in my head (not that my head is some kind of ideal repository). Geoffrey Hill might be a major contender; his work is certainly ambitious enough. 'Mercian Hymns' is marvelous. But it is his short lyrics, 'Ovid In The Third Reich' and 'September Song' for example, that impress me as perfect (or as near perfect as one can get). I believe Frost's 'Birches' and 'Bishop's 'The Art of Losing' and 'At The Fishhouses', are great poems, but are they Great or Major, and should anybody care?

As to whether I will ever be considered great or even good by posterity (whatever that may be), I never give much thought to it. I have my doubts that any of my work will survive, or even get reissued once after I'm gone, or that I even deserve to be remembered, though merit may not have all that much to do with it. I write out of compulsion; an image or half-phrase tugs at me and I follow it. Sometimes I get up to scribble a few lines in the early hours, but more often I find myself redrafting poems that suggest that they may, in time, be made craftworthy. For me, self-doubt is just part of the equipment, like ballast for the hot air balloonist.

Others need to have some ambitious goal in their sights, something not quite over the horizon, and I respect that; whatever floats their boats. But my empathy is reserved for writers like Thomas McGuane, who consider it healthy to embrace one's own insignificance. Here he is in a recent Guardian interview:

"I find it more consoling to think of myself as little than to think of myself as big. I think I've gotten that from animals, particularly dogs. Dogs live such a modest life and they don't live long, and the more you're around them, you kind of accept that. A lot of urban people who are intensely involved in human society seem furious that they're not bigger in the scheme of things." These are the sorts of people who ask, "What is nature for?" McGuane sighs. "Nature's not for anything."
Posted by Mark Granier at 11:14 am 8 comments: 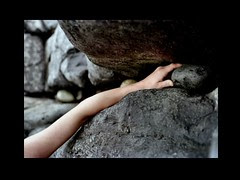 I remember someone (it may have been one of Don Paterson's aphorisms) comparing a good poem to a kind of secret door in a rock-face; once you found the way in you were presented with an unexpected vista, a whole, roomy landscape you hadn't expected. Then you left the poem, without quite remembering the way in or out. I think I remember Heany talking about something similar, which he might have referred to (riffing on Larkin) as the "poem with a hole in it"; the poem with a certain 'extraness' that resists easy elucidation: once you try to break it down into its constituent parts the door (or the hole) vanishes.

That's one way of putting it, perhaps to close to cod-mysticism for its own good. My point is that I prefer poems with some permeability, that allow for a little absorption. I don’t mind if I am slowed by some surprising linguistic texture, so long as I am able to reach in and explore around it; and so long as its shape seems pertinent to the rest. I can certainly enjoy a poem whose meaning eludes me or at least "resists my intelligence"; I don't think Bishop's At The Fishhouses is 'easy' (not to me anyway), but I trust where it takes me. Its sensuous but exacting imagery has what Reginald Shepherd might call "palpable texture." So does Komunyakaa's Facing It. So does 'The Waste Land'. So do short stretches of The Cantos.

Some poems are all but impermeable though; deliberately flat, fragmented, disassembled then bodged together again with parts conspicuously missing. You can solve such poems in the way you can a crossword puzzle, if you're good at cryptic clues and allusions. But it seems a thankless task to me (I'll admit I'm crap at crosswords).

Auden (who sang the praises of the permeable limestone landscape) called poetry "memorable speech." I think great, or even just good, poems should have at least an element of this; they should resonate in the way that a good song or piece of music does. If they manage that I will forgive them much, including a good deal of impermeability.
Posted by Mark Granier at 7:35 pm 3 comments: