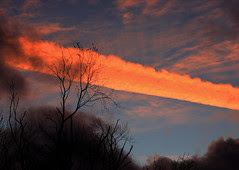 Everything tends
to its own ends.
Posted by Mark Granier at 10:38 am 5 comments: 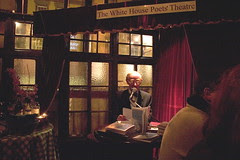 Puthwuth's last post was on the subject of readings. Not the common or garden readings where the question is (as Paul Durcan put it) "to clap weakly or weakly clap." No, rather those readings that stay in the memory because something goes awry. Ron Silliman, in his November 5th blog entry, also talks about readings. Last month he spotted a giant panda in his audience. He recollects an incident from the more distant past, where he witnessed:

"...Denise Levertov, the MC at a large, vastly overcrowded anti-war reading at Glide Church in San Francisco, getting genuinely hysterical onstage at the sight of The People’s Prick, an attendee who turn up in a six-foot tall bright pink terrycloth dildo costume. She threatened to shut the evening down on the spot and it took several of her peers to talk her down from this position, her own body visibly trembling with anger. She did not view this little bit of agitprop attendance – a direct antecedent, I suppose, of the panda who showed up at my reading last month in Ashland – in the spirit of women going topless at rock concerts, common enough at the time, but rather in the sense of the penis as an ever-present assault on women."

Four incidents from my own experiences of giving poetry readings, the first two from The Foggy Dew pub, a popular venue for readings in the 1980s and 90s.

1.
As soon as I begin to read a sulky man in a denim jacket (perhaps angered by my West Brit accent) shouts: "Why don't you write a poem about Bobby Sands?" Another man (with a proper Dublin accent) asked why he doesn't write one himself, or if perhaps he would like to recite one? At that, the heckler heads for the door, his parting shot: "What are you, Fine Fail, Fine Gael or Sinn Fein?" My rather melodramatic reply: "I'm a human fucking being." The barman walks over to me with his hand out, grinning: "Good man! Good man!"

2.
A certain Dublin poet slurs and bellows his way through a huge wad of pomes, with no sign of letting anyone else take the stage. Another very drunk Dublin poet (well, if he isn't one he should be) tells him to shut up and sit down, then picks up a beer-mat and begins to read the back of it (about brewing, hops, copper vats, etc.) as if it's a poem, pausing meaningfully every so often. His timing is as perfect as an experienced stand-up comedian; the night suddenly turns into one of the best readings I've had the pleasure of attending.

3.
A poetry reading at IADT (or was it still called Dún Laoghaire School of Art and Design?) in the late 1980s or early 1990s, where I had recently worked as a life model, one of Quentin Crisp's 'naked civil servants'. I read to a fairly large group of students, a generous audience by the standards of most readings. I am confident that it is going well. The atmosphere seems easy-going, I crack a few jokes, there are no hecklers, the students ask some pertinent questions during the brief Q&A session afterwards. Before I leave, a couple of students approach me to say thanks or ask some final question. Finally, as I am in the corridor, one last smiling girl hands me a folded slip of paper, "a poem" she has written. I tell her I'll read it, and I do, when I get home. Though written as a short poem (I wish I'd kept it), it amounts to a series of criticisms: of my age (I was in my early 30s I think, already an old codger in her book), of my feeble attempts to ingratiate myself with the students by cracking limp, self-deprecating jokes, of my balding head and pathetic attire (my "green jeans", in particular, had offended her sense of sartorial elegance, perhaps justly). And I had thought her smile had been shy! Well, I think, fuck you very much, and I wish she had handed it to me earlier, so that I might have asked her to read it to the still-present audience of her peers, or I could have read it to them myself (either of which would probably have been a grave mistake).

4.
I am asked to give a reading in Dublin (I forget where, a LONG time ago). When I arrive, it becomes clear that I am a warm-up for a local rock band. The audience have had a few pints by this stage and are getting impatient. I become so pissed off with the heckling that I find myself shouting back at them (without quite realising what I am saying): "What do you want me to do, strip?"

Peter Sirr on his Cat Flap blog, recounted his experience of being hired by Dublin City Council to give a reading in St. Catherine's Park, off Thomas Street in Dublin:

"I was, though, a bit wary about reading in St Catherine's Park. Park is probably a bit of an exaggeration; it is in fact the graveyard at the rear of St Catherine's Church in Thomas St, with the entrance in Thomas Court – not by any means a major thoroughfare. I used to drop in with the mutt to give him a bit of greenery until I realised it seemed to be used exclusively by dealers and users. I find it hard to visualise it being packed with poetry lovers on a Wednesday lunchtime. And indeed there is no-one in the park except for one of the organisers and two sound technicians who have brought an impressive bank of equipment in their Dublin City Council truck, which sits in the middle of the park, taking up about a third of it. The podium and mike are set up and waiting. It's five minutes after the advertised time and there's still no-one. A woman comes in and sits at the other end of the park. This is briefly interpreted as the act of an audience member and there is the real possibility of delivering the reading to a single distant auditor, though the sound equipment will safely carry my voice all around the Liberties. The woman, however, proves not to have come in search of poetry and faced with the prospect of enduring some, promptly flees the park.

The users who were evicted when the sound men came to set are out there somewhere, waiting for us to leave. There is some talk of reading to the organiser, or reading, as it were, speculatively, in the hope that people in the area, magnetised by my amplified poems, will pour into the park. Em, don't think so. Eventually the effort is abandoned and the cheerful soundmen – 'it's all the same to us, we get paid anyway' – load up the truck, and we all drift off. Through Pimlico and The Coombe and back home."

The worst kind of audience isn’t hecklers, users, Pandas or giant sexual organs (indeed the latter two may be among the best). Nor is it, I think, the absence of any audience at all (Durcan wrote a great poem about the experience of giving a reading to an empty hall). No, the worst kind of audience is probably Jonathan Pryce and Tim Curry in that film The Ploughman's Lunch (remember?). Pryce is a grovelling, cold-hearted, ambitious little shit and Curry is his pal. They find themselves at a rather solemn poetry reading (presumably not a very good one) and cannot contain their mirth. They let it all hang out, sniggering then laughing uproariously, veritably rolling in the aisles. It's a very funny scene, as I remember it: the sorely puzzled expressions of the other people, including the poet, the sense of two utterly different worlds colliding. It hasn't happened to me yet. I hope that if it ever does I'll be able to handle it, either by joining in or decking the bastards.
Posted by Mark Granier at 5:22 pm 2 comments: