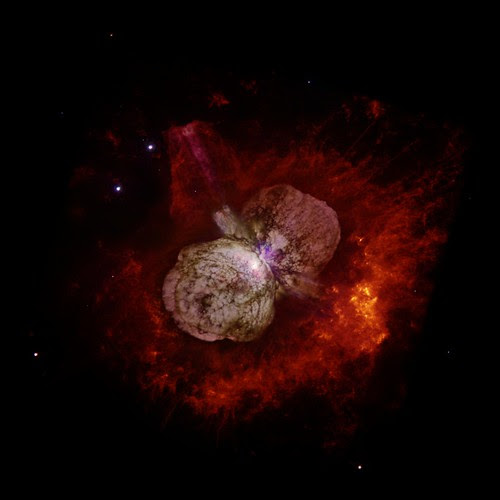 Some things we can say
about Eta Carinae:

It was catalogued by Halley.
The Chinese knew it as Tseen She

meaning Heaven’s Alter.
It likely a binary, a pair

of supergiants, the smaller
hugged and tugged by the larger.

It is four or five million
times brighter than our sun.

It is around eight thousand light years
distant, so really quite near,

just a couple of doors
down our galactic avenue, our neighbours

are apparently blowing their tops
and won’t stop

until, in some already ancient tomorrow,
their whole house, finally, blows

(so, next Tuesday, a blue burn in the night sky
bright enough to read by,

or, if our luck’s out, a gamma ray
might come glancing this way).

The universe is a blast
and stars far from steadfast

as they know well, those avid watchers
in their burnished towers

who might murmur: twinkle, twinkle
luminous blue variable
Posted by Mark Granier at 3:39 pm No comments: 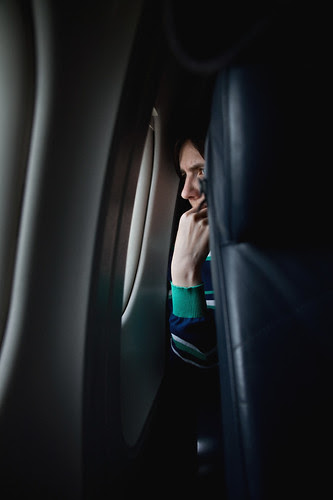 I had the displeasure of flying Ryanair again recently, to Malaga and back. Actually, the flight itself was fine and the cramped seating wasn't that uncomfortable for a shortish flight, a bit like being on a crowded 46A bus traveling over occasionally bumpy roads (the dark blue and yellow colour scheme was also very C.I.E.). No, the problem was the landing. I sensed it might be a bad one as we came to the last suspended rush, a held breath before the undercarriage –– all that separates our fuselage (so much plastic and alloy, paper and air) –– from the implacably hard, racing earth. Too fast, I thought, and too vertical, this is going to be yet another hard-arsed, Ryanair jolt to the spine. I braced myself by gripping the seat in front. Sure enough, there was a shocking, almighty WHUMP before the reverse-thrust roar kicked in, and I knew we'd survived.

Melodramatic? Maybe, but when I entrust myself to those who will convey my one, mortal incarnation 12,000 meters above where it rightly belongs I expect them to be mindful of my/our frailty. Not all Ryanair landings are this unpleasant (just most of them in my experience); I've noticed that when the engines are given an extra boost just before the wheels meet the runway the landing is lovely and smooth. Knowing Ryanair's obsession with cost-saving, I have speculated whether the pilots have been instructed (off the record) to cut their engines (or reduce power) prior to landing to save fuel. Is this possible, or even legal re airline safety regulations?

Incidentally, years ago, on what may have been my first (hard) Ryanair landing, when I heard that ridiculous cavalry trumpet over the intercom (actually to celebrate another flight arriving on or ahead of schedule), I mistakenly thought it was a kind of one-off joke, gallows humour along the lines of: 'Gee guys, apologies for the terrible landing, but hey, we're still in one piece!'
Posted by Mark Granier at 1:10 pm No comments: 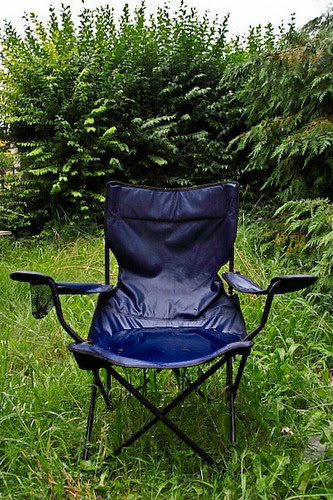 Odd, disturbing dream last night, perhaps because I was back in my own bed (our bed) after having spent a week away, in Clifden and, later, Galway, with friends.

It seemed as if I was awake, and perhaps I was, half-awake. I was conscious of a presence just outside the bedroom door, which I can't quite see from the bed as it is in the same wall that the headrest backs against; also, a filing cabinet partly obscures it. Was the door open? I think so. My aunt Nuala, or rather her ghost, was standing outside, or so I thought (she died over two years ago). I have the impression that I was calling her to come in. There was urgency, but also fear. Did I really want her to come in? And was my mother there also? Were there other presences? The dream has faded, was already fading when it, or something else, woke me at around 4.30. I had to read for half an hour before going back to sleep (Richard Ford's Canada, which I took on holiday and am now thoroughly immersed in).

I also had a disturbing dream while in Clifden. I just recall one vivid scene. A skinny, long-limbed man/creature jumped or fell off a high cliff into the sea. Would he/it be killed? No. The dream-camera suddenly zoomed down and revealed it walking purposefully across the sea floor. Then it was up close, in my face, a strange Hokusai ghost/Gollum figure. And i woke. Part of the dream's inspiration no doubt comes from watching my friends Pat and Chris diving into the sea earlier that day. No great heights were involved, just rocks a few feet above the water. But it was unnerving as there was a (very slight) danger that they could strike an underwater shelf that extended a little distance beyond the rock's base, so they had to run before diving, to clear it.

[Photo above is of Nuala's chair, taken perhaps six years ago, after a day of heavy rain]
Posted by Mark Granier at 11:11 am No comments: