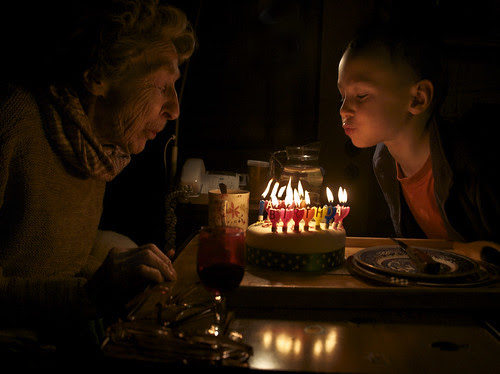 I suppose there will come a time in the not too distant future when I will stop posting about my mother. Not yet though, not when her birthday coincides with Mother's Day just over a year since she died.

My wife reminded me, as usual. And it did occur to me that my wife should be included, being a mother. So I sneaked out of the house this morning and dithered in Superquinn (M&S wasn't open yet), feeling like a pathetic twit trying to decide what would be appropriate, thought-wise, price-wise, protocol-wise in general. I hadn't a clue really, so I bought the usual for both of them; that is, a thin but elegant clutch of lilies (5 Stems For The Price of 3) for my wife and and a bunch of yellow-red tulips for mum. My wife had already bought some potted pansies to put on mum's grave a few days before. I thought I might take both these and the tulips to lay on her plot in Deansgrange. But then I thought that the tulips will be nice to have in the house, as a little tribute to mum, and they'll last here for a little while longer out of the forecasted snow.

I ended up driving there in the late afternoon with my cousin Fiachra, whom I had picked up so that he could come back here and do some work on my computer (our docklands project). The cemetery was busy, full of impatient-seeming drivers weaving too quickly in and out of those parked on the double yellow. We found the grave fairly easily. I had a basic idea where it was, just off the path near where the main road takes a slight bend, a tall wall to the right and two statues of the Virgin on the left (mum's near the second, more immaculate one). Fiachra was the one who spotted it first. It's my grandparents' grave, the dark headstone not yet bearing mum's name.

My mother never visited any graves as far as I recall. She didn't put much stock in the death-stuff. What do you say to a grave? Anything I suppose. I stood facing the stone, as many do: solemn rituals under the slab-coloured wintery sky, a cold wind getting into gear. I didn't wait, just picked up the dead carnations and roses we'd left there on her death's anniversary last month, set down the pansies, said happy birthday and headed back to the car.

Posted by Mark Granier at 9:35 pm No comments: