A Dream In Colour 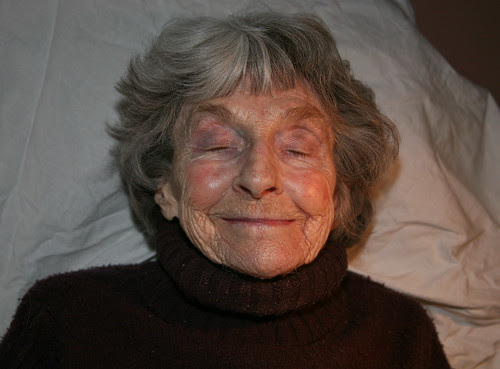 I am reposting this image for a reason.

I had another dream about mum, this morning just before I woke late (having fallen asleep again after being woken earlier by the wean on the rampage).

It was more an image than a narrative. I was looking at a large colour photograph of her (not at all like the one above) sitting asleep in a dressing gown in an armchair, viewed from the side. Her head had fallen back on the headrest. Behind her there was a long bed, and behind this something else, another chair perhaps. The composition was perfectly balanced and very striking, especially since the dominant element was the tall broad wall (with possibly a single unshaded lightbulb burning) that rose to the ceiling above mum, bed, etc. The wall was painted a very strong colour, a kind of turquoise. I remember being surprised that the composition was so good; in fact the photograph was very powerful and haunting. It wasn't taken by me, but, I initially thought, by my uncle Niall.

Was I handed this photograph or did it come in an envelope or just appear before me? I can't remember. I knew what it meant though, or part of the story behind it. Mum had taken part in what I thought of as a 'dream trial' (more correctly sleep experiment). Perhaps this is why I thought Niall (who was a doctor) had taken the photograph. But in the dream I eventually became convinced that he hadn't taken it. Someone else had, a photographer who would have cared about composition, colour, etc.

One of the reasons I think the dream may be of some importance (though only to me of course) is that I am rarely conscious of having dreamed in colour. It probably relates to the image above: my mother with her eyes closed. I even suggested, in that piece, that she looks as if she's having a nice dream. It may also have something to do with my hoping to find some clues as to my natural father's whereabouts. My mother once told me that Niall had hired a private detective and managed to actually trace my father (who was married by that stage). She couldn't offer any details though and when I asked my uncle he said he had no recollection of this, and perhaps she was mistaken. So the information/documentation, like the dream photo, will have to come from another source. Or it may be that the dream is more about simply missing my mother. After all, if she is sleeping she can wake up.
Posted by Mark Granier at 3:12 pm No comments:

Something inside me must believe in the occult gravity of anniversaries, even if I can't really see how the fact that my mother died exactly one year ago today makes this day any more significant than yesterday or tomorrow. But humans abide by rituals, and I am, in my secular way, as ritualistic as any church-goer.

So driving back from Wexford to Dublin earlier this evening it hit me, surely as a cloudful of rain skittering across the windscreen. Perhaps it was all the stronger because I'd spent the day with my cousins Pat, Dave, Fiachra, Niall and his son; a satisfyingly busy day photographing and bubble-wrapping Pat's paintings (which we had also spent hours doing yesterday) and loading them into a removal van, to be driven to my inlaws' place, where there was a spare stable to store his life's work (approx 500 paintings and drawings) and give his house in Bray some real breathing space. I hadn't had time to dwell on the day that was in it. My wife Sam and I had meant to visit mum's grave that afternoon with some flowers, but this plan had to be abandoned. Sam needed to get her car NCT'd in Dublin so she left before I did. Once on the road I had nothing but my thoughts as a companion.

There is something about that familiar 50 minute drive, alone in the car's hermetic dream-space, the road smoothly swerving or rolling over long straight hills, anthropomorphic ivied tree-silhouettes, evening coming on, the Sugarloaf sailing its dark fin. My mother used to enjoy driving before she gave it up prematurely in her 50s. But it wasn't only that. The anniversary of course is part of it, as is the loss of a routine that had developed over the years when I was caring for mum; whenever I left her for a few hours or (when she was less dependent) overnight, I would call her the moment I arrived and let her know when I was on the way back. Now, the absence of the need to make these calls intensifies a sense of heaviness that is also lightness, a phantom wind-resistance, that is also a kind of parting, in which the passing landscape appears less (or more) real.

All these things are part of it, but the feeling has overtaken me before on this (and sometimes other) longish drives, even when mum was still alive. What else then? What stirring, what embedded pattern, surge, cascade of chemicals setting off memories and half-memories, spirit-stuff, ripples in the neural net? Whatever it was/is, I continue to miss her. I wish I could believe in her continuing, being out there in some quantum time-leased apartment, something more than dispersed carbon, her breath now the wind's fucking poetry.

I often think of something a friend of mine, Johnny, said to me shortly after mum died: when your parents die you become an orphan. This is I suppose especially true in my case because I never knew my father and was brought up an only child (though I have a wonderful half brother I later met). I've been lucky though, with my mother, my wife, son and some very close friends/relations.

I took the photo above a few years ago, for a disabled driving ID that enabled me to park in wheelchair slots when mum was in the car. She closed her eyes at one point, an involuntarily moment that made her appear youthful: as if she's having a good dream, or someone has told her to close her eyes, make a wish.
Posted by Mark Granier at 11:12 pm 2 comments: 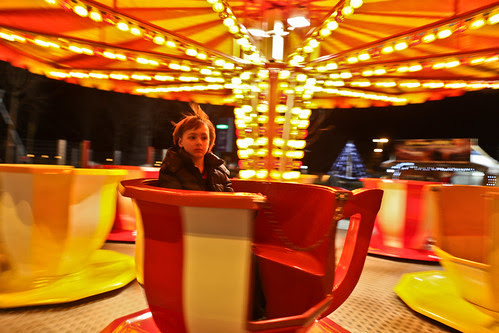 "My mind goes round my brain like the earth goes round the sun."
Posted by Mark Granier at 3:24 pm No comments: