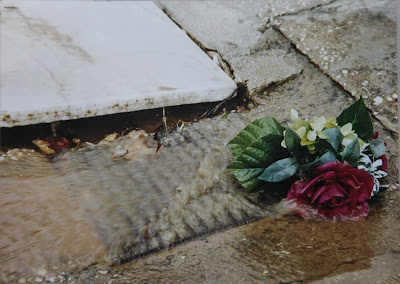 Fifteen years ago, when it happened, I was in the little town of Silves in Portugal. The photo above was taken in the local cemetery.

We’d brought my mother and her two sisters, Nuala and Moira, on a holiday. They were all in their eighties. The holiday was my cousins’, Isobel's and David’s, idea (one of the sisters, Nuala, was Isobel's and David's mum). I wish I’d done holidays like this more often, because they loved it: swimming or basking by the pool in the rented house among lemon groves, my mother’s osteoarthritis almost forgotten; they all opened to the heat, Moira especially, her natural but very English exuberance affecting us all, as if we were flowers that had been starved of sunlight, warmth and, for want of a better word, fun.

In the two photos below: from left to right: Moira, my mother Sheila and Isobel's mother, Nuala. 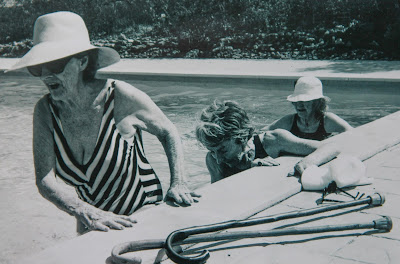 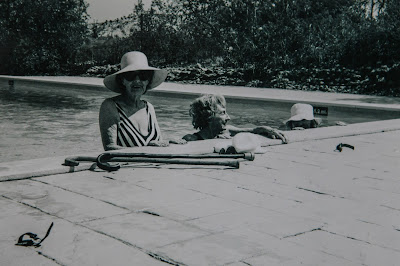 The drive there had been an adventure in itself, and not a pleasant one: the first time I’d driven in a foreign country, on the other side of the road. We got hopelessly lost and ended up in a village off the motorway, where I drove the wrong way into a little roundabout. There were a few cops nearby who witnessed this and stopped us, charging us an on-the-spot fine of around 80 Euros. Eventually we called the agent and, when she arrived, followed her car. The journey was about half an hour and when she took an obscure turn and drove down a dirt track, through a dog-barking farm, it became clear just how impossible it would have been to find the place on our own.

As we approached our villa, we noticed that the sky in the near distance had a pronounced orangy tinge and was flickering in an odd way. I remember Moira’s unperturbed English drawl from the back seat: ‘Oh my god, we’re driving into a forest fire.’

It was a fire alright, but thankfully distant, miles beyond the villa. When I walked onto the veranda next morning I saw what looked like a tiny file of burnt matches on the crests of the rounded, earth-coloured hills.

The place seemed idyllic. Each night I'd check the porch light for the two or three geckos that congregated there, little household gods.

About a week later, myself and Isobel were in a local supermarket. I remember I was looking for fresh coffee and found it difficult to identify from the Portuguese packaging. I asked a couple of Scottish tourists if they knew what aisle it might be in. ‘Have you heard’, one of them asked me, ‘Manhattan is under attack.’ When I told Isobel we both thought it amusing. Maybe they were a bit touched. Something might have happened but 'under attack' sounded like an hysterical exaggeration.

When we wandered out into the narrow, cobbled streets we noticed a large group of people crowding outside a little sports shop which happened to have a wall-mounted TV near the door. That’s when we saw what looked like a replay from an action flick. Isobel says we actually saw the second plane in real time, though I am not sure. I can’t remember exactly what I saw (a plane plunging into the monolithic flank of a building, oily smoke, blossoming flames...). All I remember is that it looked unreal, and deeply wrong. Something big had just turned a corner, or obliterated it.

We spent much of the rest of the holiday in the villa watching CNN, the only English language station we could find. The day before we were leaving for home, Isobel told me she was worried about her mother, who was on Warfarin for her heart. Nuala had been feeling weak in her knees, not a good symptom. We made an appointment for the following day in Faro, where the airport was. We had till late afternoon to catch the flight.

The doctor was concerned but not too much so; he told us he'd like to send Nuala for some scans but there wouldn't be time, and she'd probably be okay.

Nuala wasn't okay. In the airport it became clear that she was confused and dopy and was drooping slightly in her wheelchair (we had found wheelchairs for both Sheila and Nuala). The place was chaotic, our first encounter with the havoc wrought by 9/11: delays, vast queues, soldiers with machine guns, bins at each gate to discard anything vaguely sharp or pointed; we sacrificed an old pair of decorative scissors, a souvenir I think for some trip grandmother had taken to somewhere, Lourdes perhaps. I got on the phone to try and reach the surgery we'd been to but it was pretty hopeless with my lack of Portuguese.

Then there was an announcement. Our flight was leaving, unexpectedly, as we'd thought we'd be delayed for far longer. It was a two hour trip. So we did a quick calculation and decided that Nuala would be better off rushed to Beaumont Hospital, which was near Dublin airport. We almost got put off the plane when I requested an ambulance be there when we arrived. 'Oh? Is somebody ill? We can't have seriously ill passengers on the plane.' I think they may have been hinting that we should just keep schtum, because they accepted my u-turn reassurance that nobody was badly ill, we'd be just fine, thanks.

It was the right decision, because Nuala had already had her stroke ('a massive cranial haemorrhage'). Yet she got the necessary treatment, almost completely recovered and survived another ten years.

They are all dead now. Looking back, that holiday looms like a darkly bright outpost, something at the brink of a world-shift that almost seemed forseeable.

Over the years, I have found myself writing three, very different poems in response to 9/11. Only one of them, Of A Man, Falling, confronts the event directly, and I posted that poem for the anniversary in 11/11/11.

Here's another one, with a more oblique reference, part of a short sequence (about lizards) that includes those geckos I mentioned:

It could let go its tail if caught.

Fat siesta sun full
on my back, I kept still, held
myself invisible, in love
with its dry archaeological scuttle

Those two, geckos with the magic toes ––
guardians of our rented house
in Portugal. While we watched

they returned each night and set
under the porch light
short delicate shadows.

When you threw another log on the fire
something half-fell, half-

scrambled, smoking on the hearth.
Must have been asleep in the woodpile. For

a handful of heartbeats it froze
as if considering –– flagstones, open door

to the Andalusian stars ––
before skittering back to its bolt-hole, the core

raftered with blue-orange flame ––
safe as ashes, as clay,

already part of the same
sky we’d be vapouring into the following day.

Saw a sand lizard’s face poke
out of a slice

of blackness in a gryke
and was vouchsafed

something of the island’s discrete
micro-climates –– time zones

seeded between the old
carboniferous floors

of bramble and tiny, rare
nova-flowers that burn

in there with feathery tails